As we are near the end of 2018, I thought it would be fun to take a look at the highlights of my year and those events which were special and unique. A few of them I have not shared with you yet such as my interview with Radio Television Artesia, dinner with Portugal’s Secretary of State of Citizenship and Equality, being the emcee for the previous Consul General’s Farewell Reception, and more.

Before we get into the list, I would like to thank all of the people who put on these great events; from the organizers and performers to the cooks and volunteers and everyone in between, muito obrigada for all your talent, time and hard work.

Without further ado, here is my year in review of finding pieces of Portugal in Vancouver. I hope you enjoy it as much as I did. 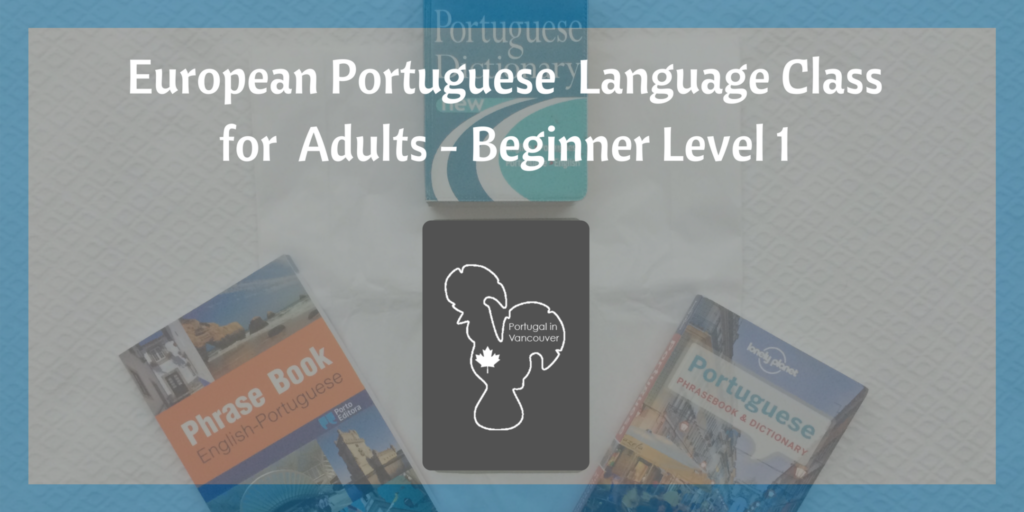 At the start of the year, we offered our first European Portuguese Language Class for Adults. We started with 12 students and now next month, we will have three classes and 32 students. I could not offer this service without the help and dedication of my instructors, Aurélia Silva and Sandy Gualdino. We look forward to our next session and the addition of  Manuela Mowlavi to the team! 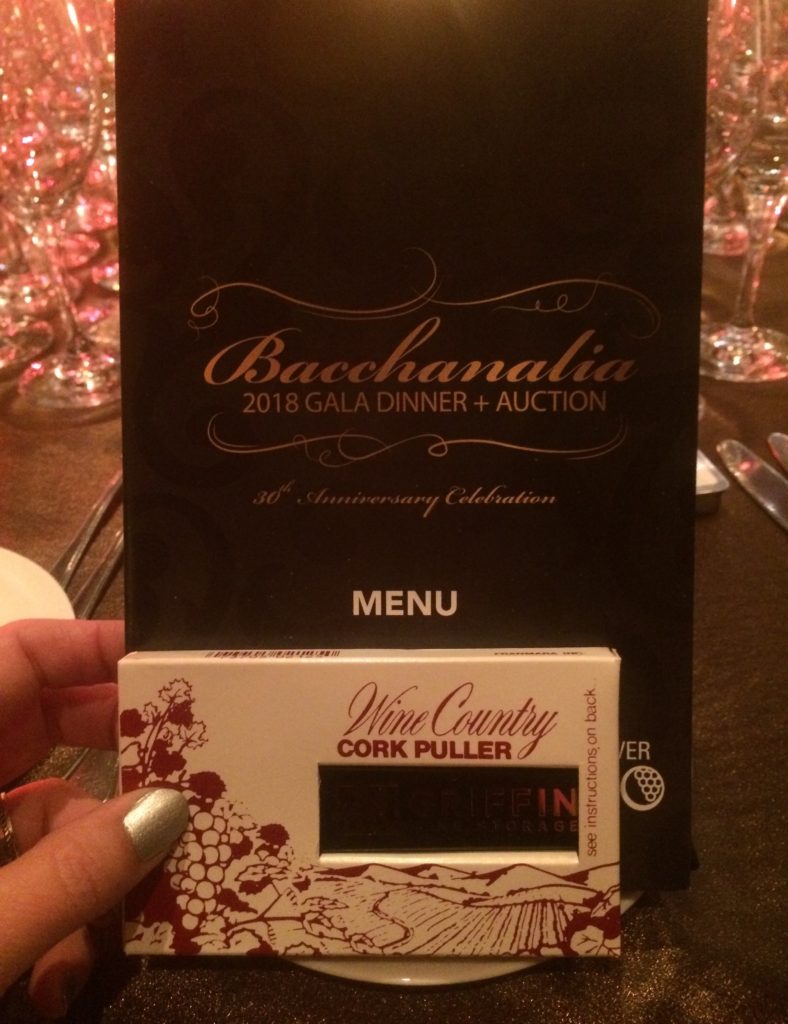 I was privileged to be invited to the Vancouver International Wine Festival Gala Dinner as the guest of the previous Consul General of Portugal, Maria João Boavida.  The gala kicked off the start of the International Wine Festival and this year marked the event’s 40th anniversary. Each year, this festival shines the spotlight on one country or region and this year the festival showcased wines from Spain and Portugal. It was a decadent night filled with wine, wine, and more wine! Plus great company and delicious food. 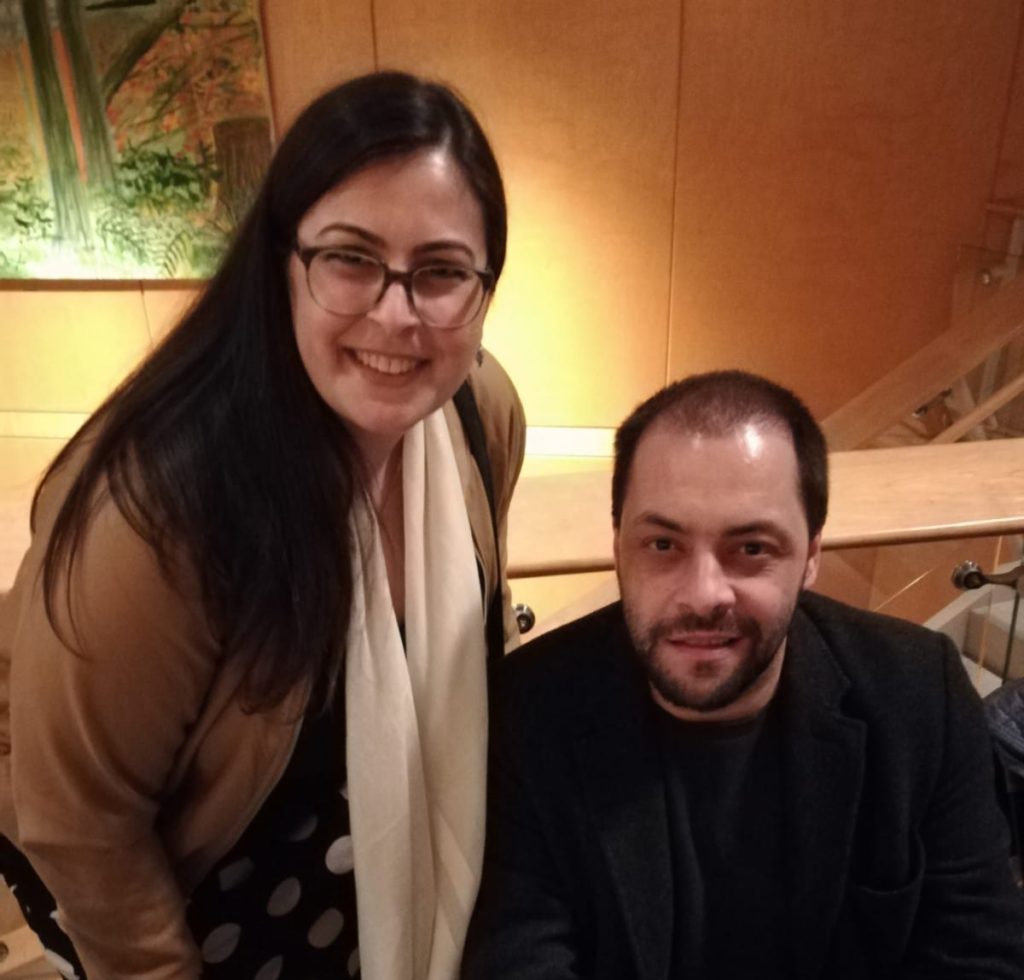 This was the second time I saw Antonio Zambujo in concert. If you don’t know who he is, Antonio Zambujo is an award-winning Portuguese singer and songwriter and one of the most innovative singers on the scene today.  If you haven’t had the chance to see him perform live, I encourage you to do so the next time he is back in Vancouver. You won’t be disappointed. 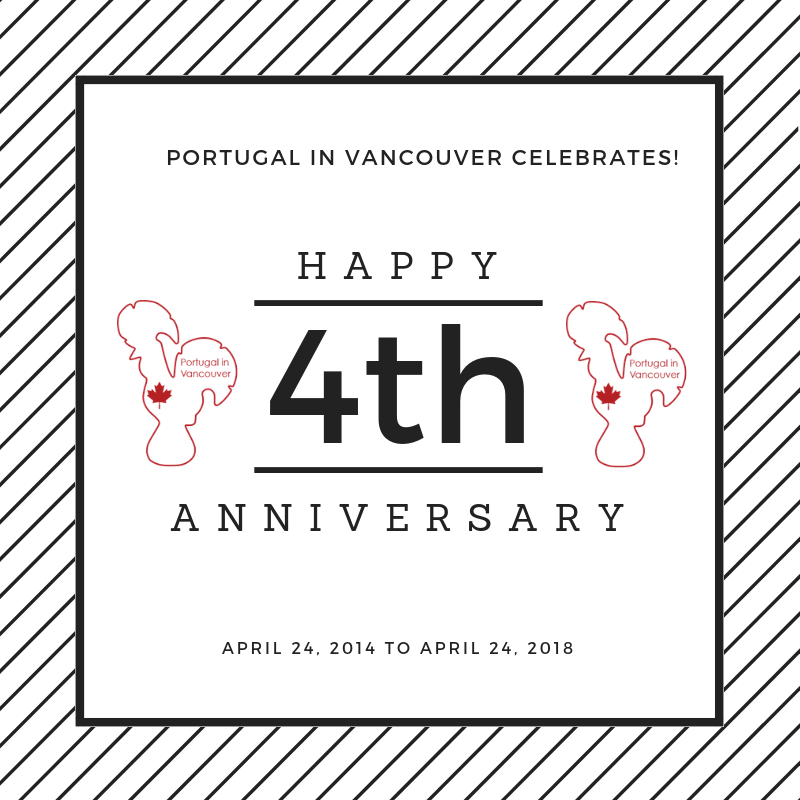 This year marked Portugal in Vancouver’s 4th Anniversary! Hurray! Four years ago, I created Portugal in Vancouver. It was one of the best decisions I ever made. I love our culture and our community and sharing with you all the little pieces of Portugal that I find in Vancouver and beyond. Thank you to everyone who has followed this page and shared it with your friends and family. You are what keeps this page (and me) going. Obrigada!

RTA made a special trip to Vancouver in May where they interviewed a number of people from the local Portuguese community.  It was an honour to be included in this group.  Click on the video above to see what I had to say about our community and how Portuguese culture is celebrated. The video has been cued up to my interview, but if you would like to see the rest of the video, then rewind to the beginning.  Also, if you would like to see videos of all the other interviews RTA conducted during their visit to Vancouver, click here: RTA in Vancouver.

One of my favourite days is Dia de Portugal.  This year I celebrated at the Portuguese Cultural Centre (PCC) of BC in Burnaby, formerly known as the Portuguese Canadian Seniors Foundation. In addition to
celebrating Portugal, I also volunteered to sell tickets for all the delicious food the PCC had cooked up for everyone to enjoy. There was also live music provided by accordionista Joana Reis. The place was packed, but all in all, everyone had a good time celebrating our culture. 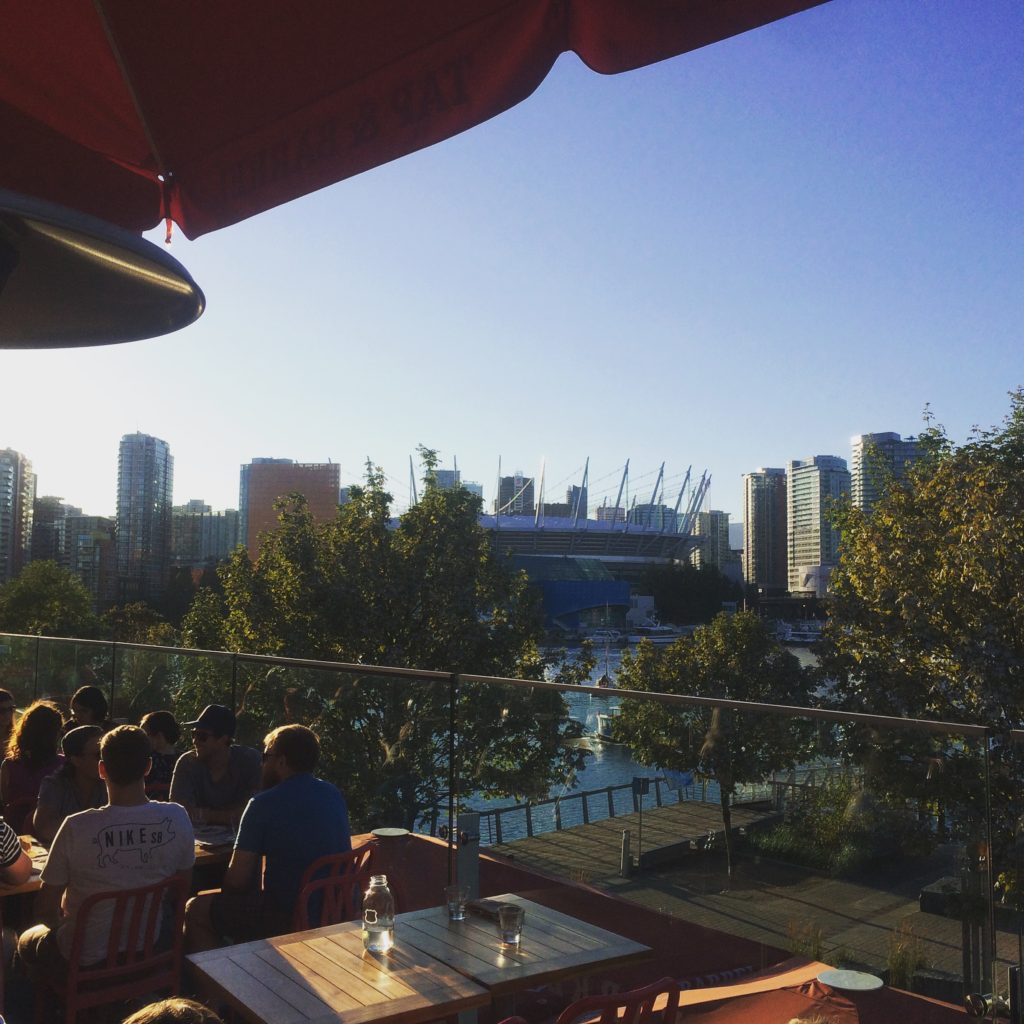 July was a quiet month, so I took the opportunity to rest and recharge.  Please enjoy this beautiful picture of Vancouver on a spectacular summer day. 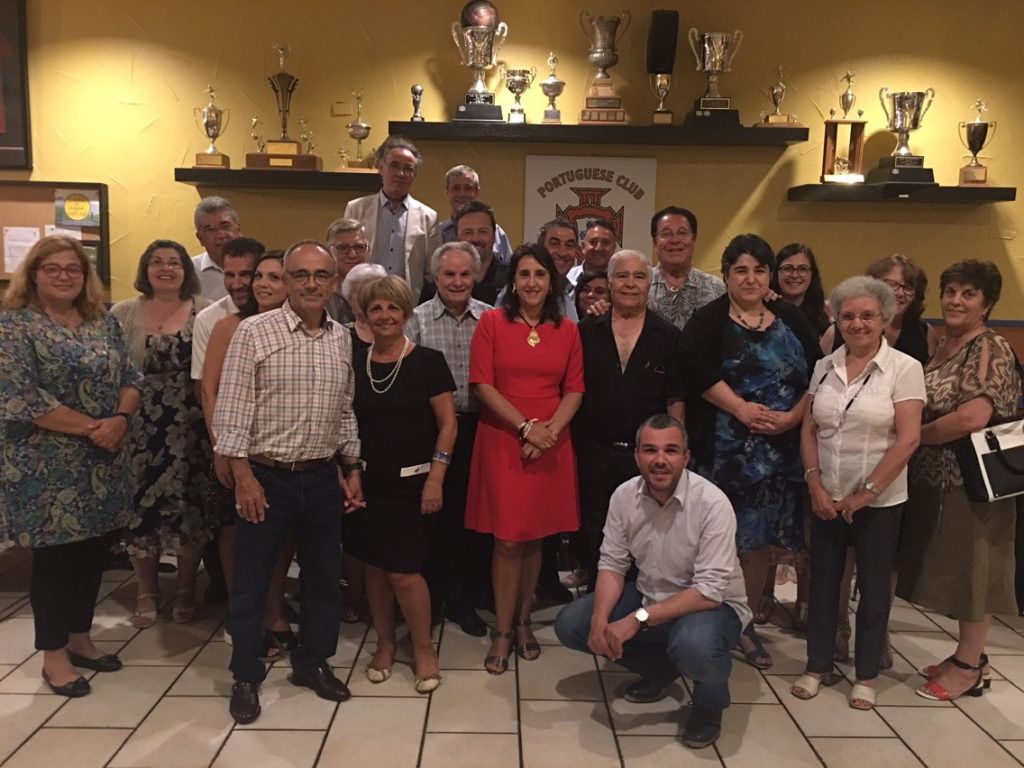 August was a bit busier, so it was good that I got a chance to rest in July.  Portugal’s Secretary of State of Citizenship and Equality, Rosa Monteiro, visited Vancouver for a conference in early August. During her visit, the previous Consul General of Portugal, Maria João Boavida, hosted a dinner for her at the Portuguese Club of Vancouver.  I was honoured to be invited and to meet the Secretary of State as well as enjoy the company of all the other dinner guests that evening. 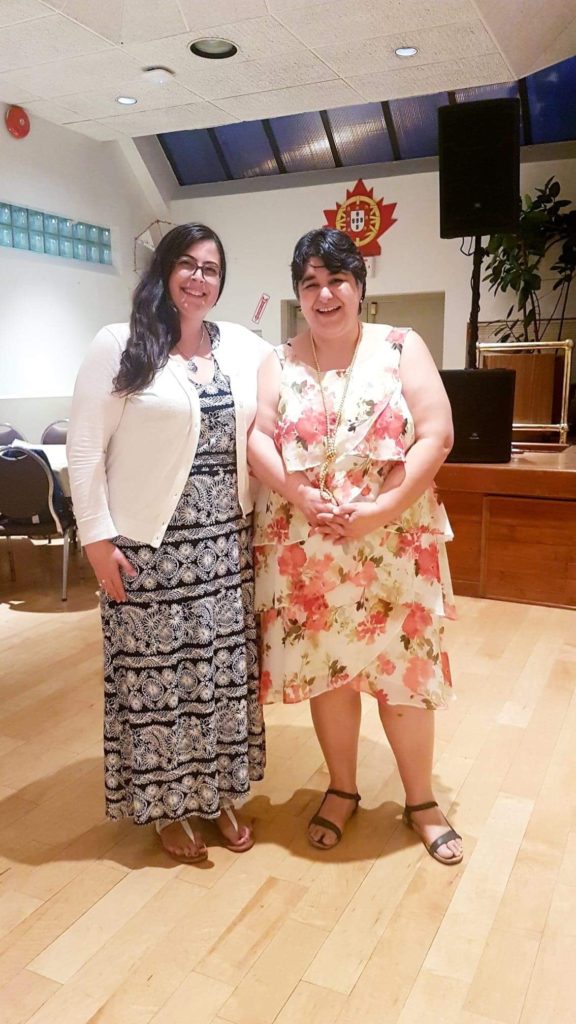 This next memory is bittersweet. The previous Consul General, Maria João Boavida, asked me to emcee her Farewell Reception.  While I was extremely happy to do it, I was also very sad to see her term in Vancouver coming to an end. She was one of my biggest supporters and we became friends during her time in Vancouver. The reception was held at the Portuguese Cultural Centre and in attendance was the Minister of Jobs, Trade and Technology, the Honourable Bruce Ralston, who gave a speech thanking the Consul General for her time and service in Vancouver and with the Consular Corps of BC.  Maria João Boavida is now stationed in Marseille, France and although I miss her, I hope she is enjoying her new posting. 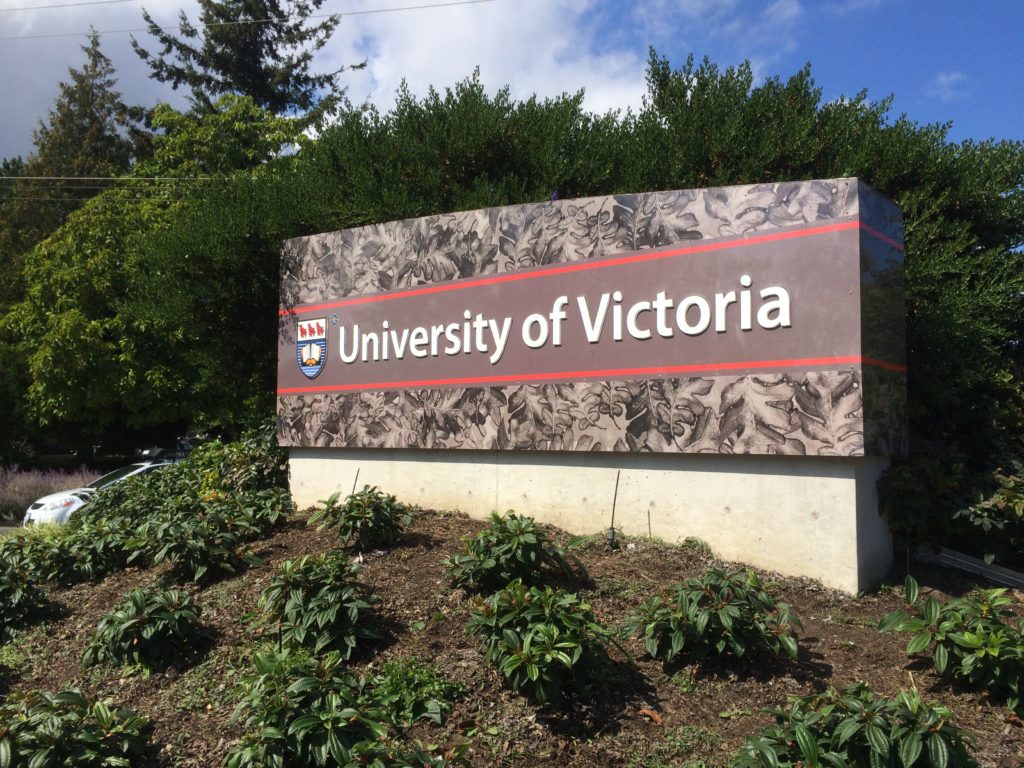 I made a trip to Victoria on the Labour Day Long Weekend and boy, was my itinerary jam-packed with Portuguese things to do! First off… 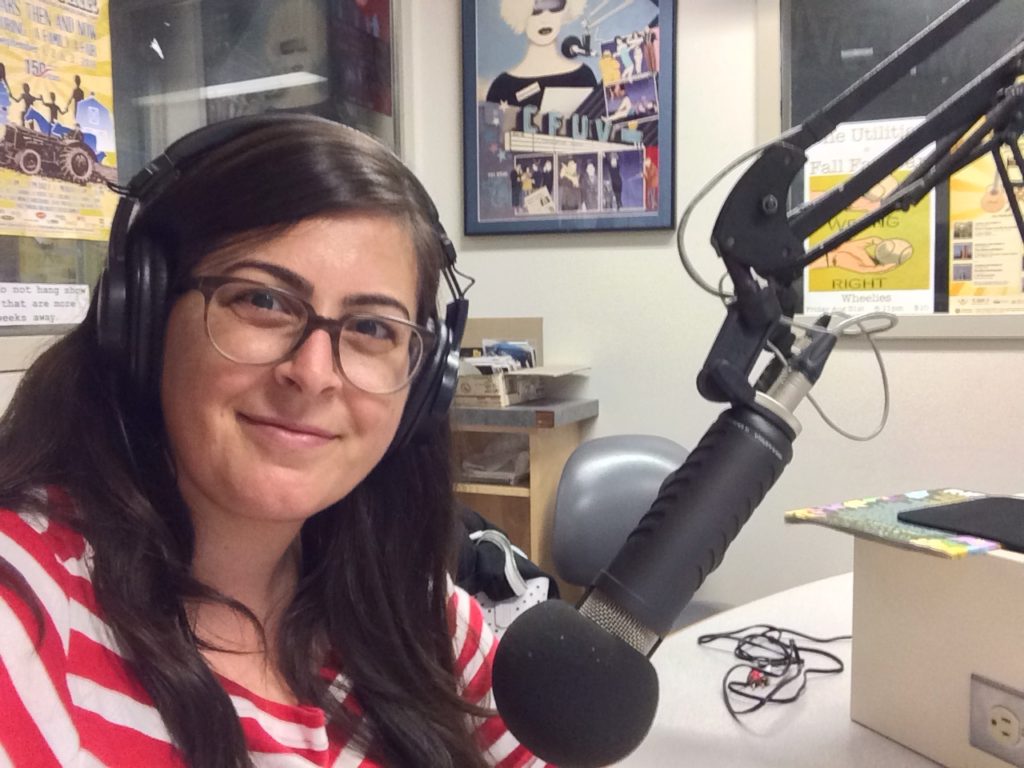 I had an on-air interview with Connie Pereira of RadioBC which was very exciting! I normally record my segments for RadioBC, so doing a live broadcast was thrilling and Connie was a professional behind the microphone. I learned a lot from her that day. 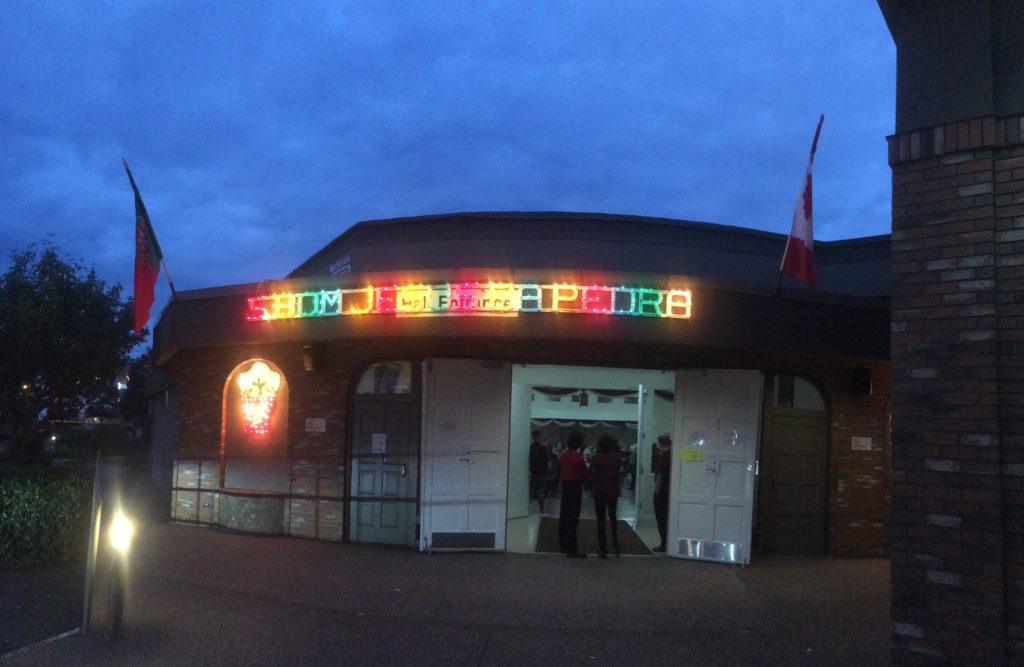 For the first time, I attended the Festa do Senhor Bom Jesus Da Pedra at Our  Lady of Fatima in Victoria and was very impressed at the size of this festa, how well the event was organized, the variety of food, and the number of people who attended. A big congratulations to all the volunteers who worked so hard to make this festa a success.  I was also wowed by the Folclore Alegre group.  They danced and drummed their hearts out. 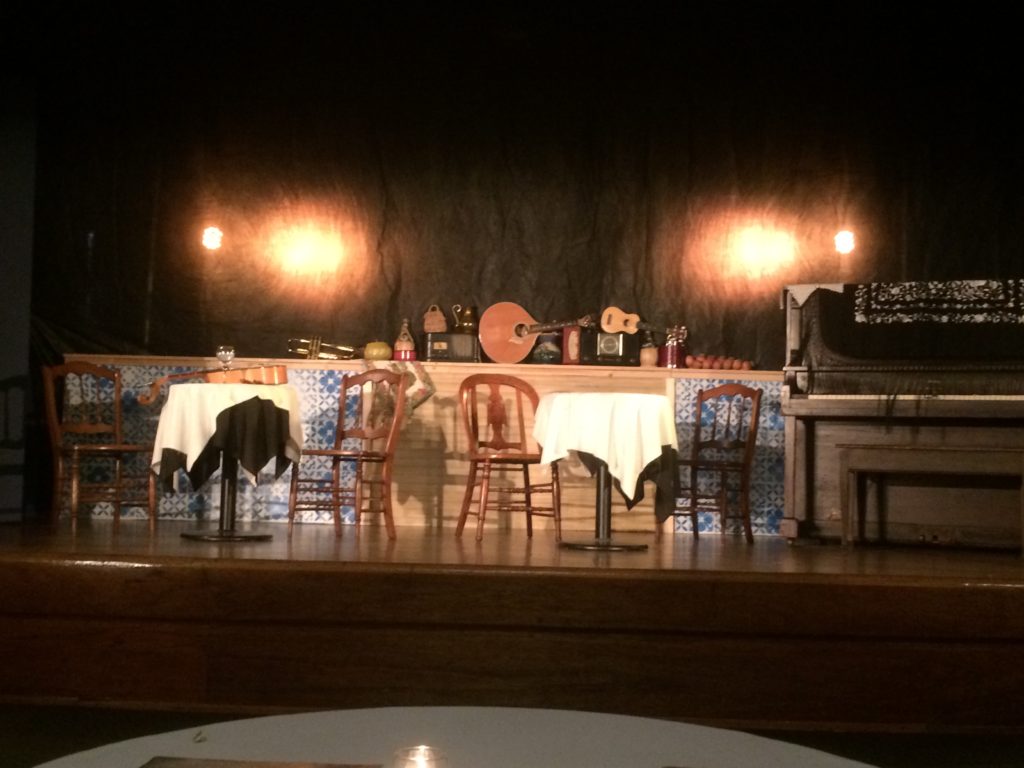 Lastly, I saw my friend Elaine Avila’s play, “Fado: The Saddest Music in the World” at the Victoria Fringe Festival which I hope makes its way to Vancouver one day.  It is always a delight to see Portugal and Portuguese culture featured in mainstream events such as the Fringe Festival. 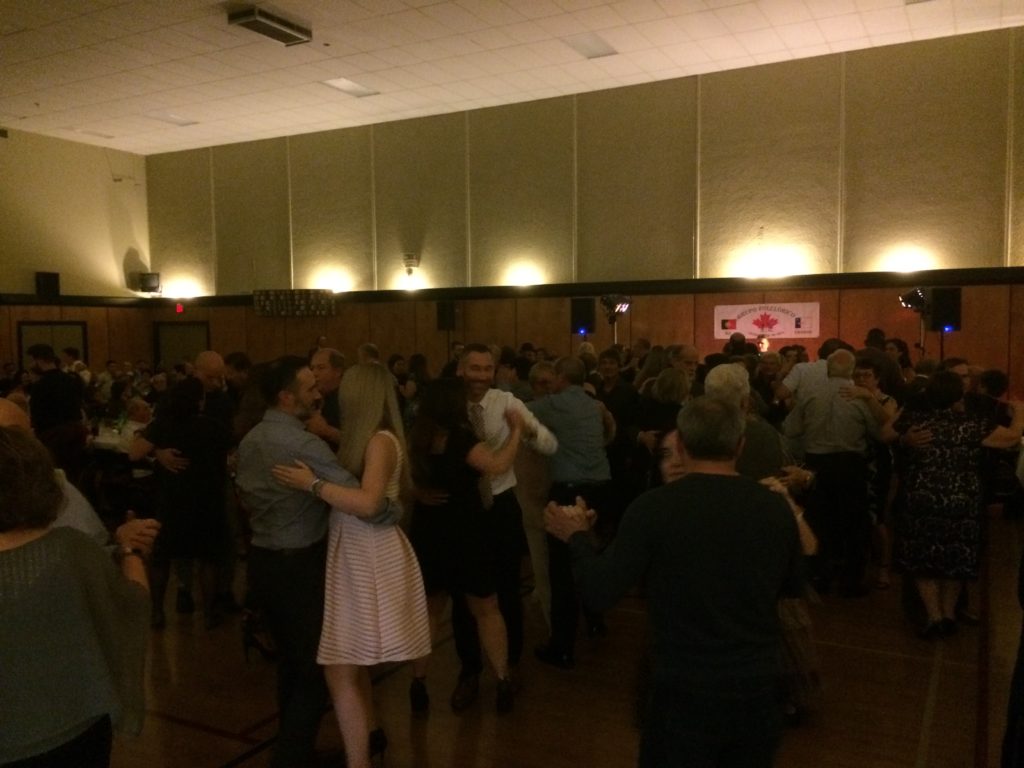 I attended the Chico Avila Concert which was hosted by the Chamaritta do Pico Folklore Group. They put on such a great event with delicious food and fabulous entertainment.  I know that Chico Avila has performed many times before in Vancouver (because my mom likes to tell me so) but this was my first time seeing him perform. Every time Chico Avila took to the stage, the dance floor was packed. It was a very memorable night. 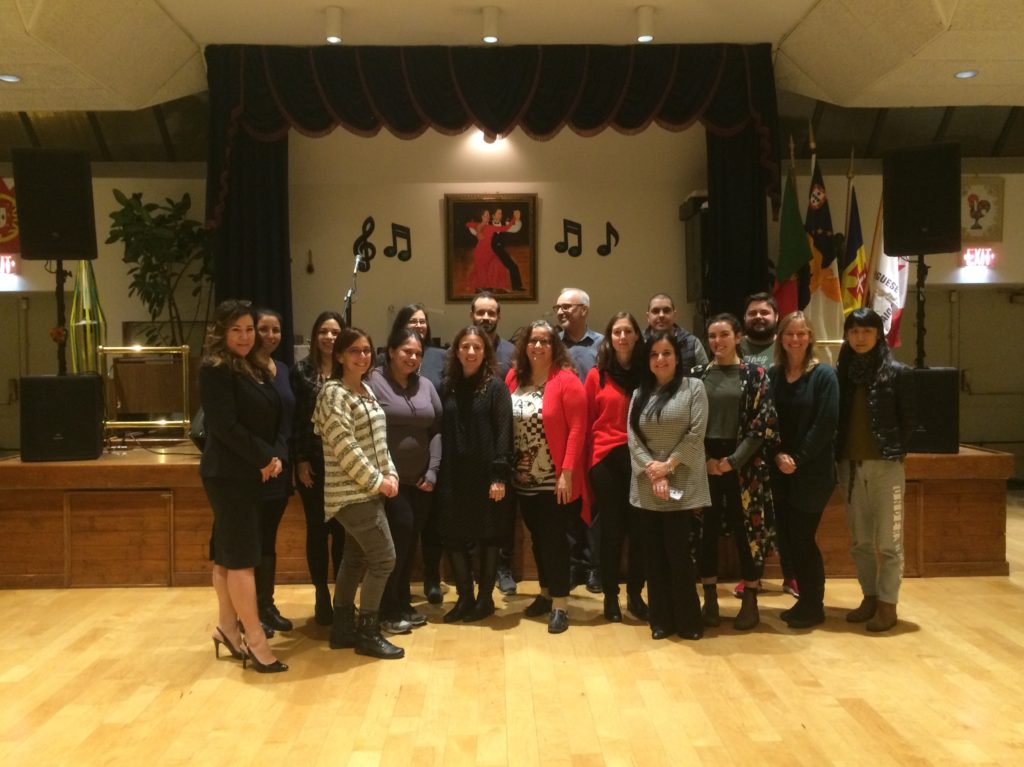 The new Consul General of Portugal, Dta. Marta Cowling, visited our European Portuguese Language Classes for Adults in November. Our students thoroughly enjoyed her visit and we sincerely thank her for taking the time to answer all of their many, many questions. Did you know that the Consulate General of Portugal has both a website and a Facebook page? 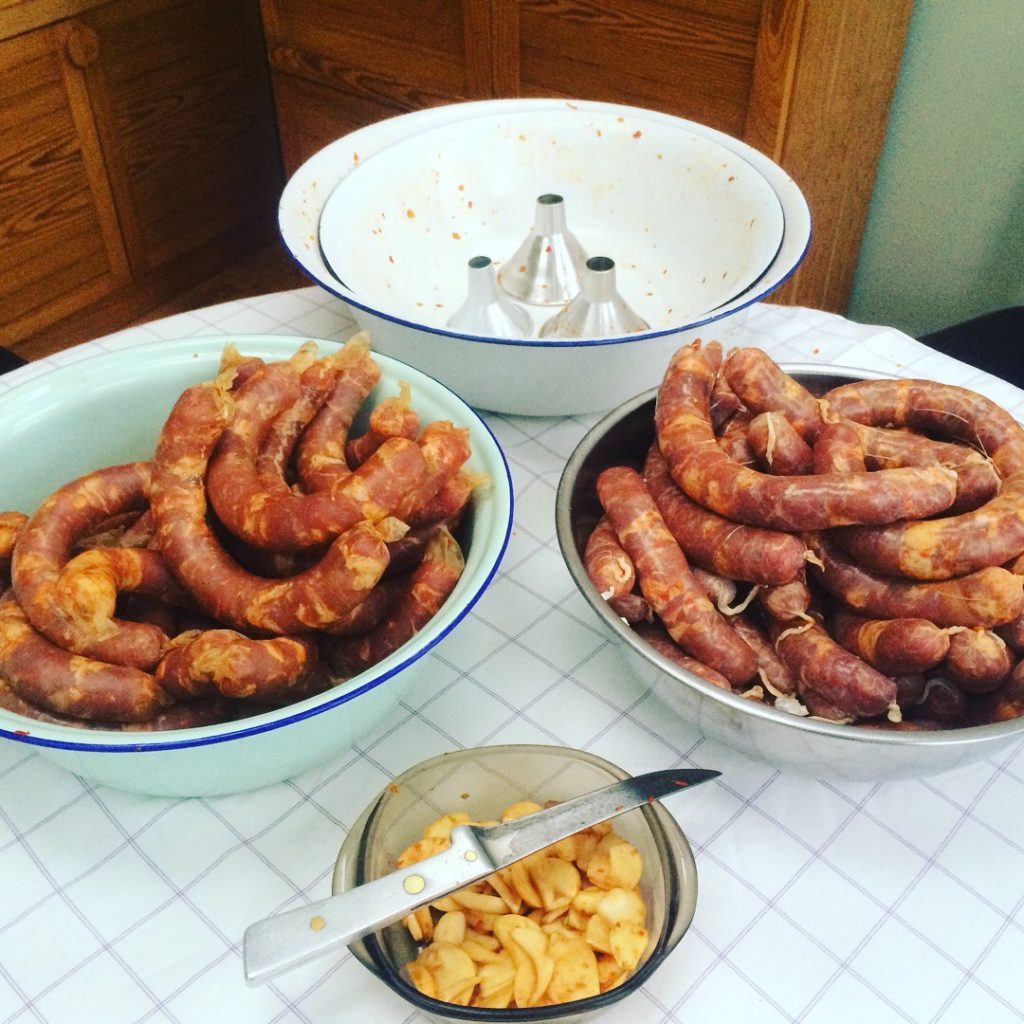 Making chouriço with my family every year may not seem like a highlight, but it is for me. The older I get, the more I appreciate spending time with them especially my parents and having them pass down their knowledge to us.  It has become a tradition for us to make chouriço at this time of year and I feel extremely lucky to have them here with us to teach us their recipe and technique for what I think is the best tasting chouriço around but I may be biased ?.

If you’ve made it to the end, then I thank you for your time. This list ended up being longer than I intended, but it was fun for me to go through the year and remember all the good times I had in 2018. It’s so easy to focus on the negative and this year in review helped me take note of all the things for which I am grateful.

Wishing you and yours peace, health, happiness, and prosperity in the coming New Year.  Têm um Feliz Ano Novo!

Finding pieces of Portugal in Vancouver to share with you. Click on the link to register for our European Portuguese Language Classes.